Shericka Jackson completed a Jamaican one-two-three in Tokyo with a time of 10.76, 0.02 behind Fraser-Pryce.

“I have been struggling with my injury back and forth,” Thompson-Herah told BBC Sport after victory.

“I see all the bad comments. I take all of my losses, all of my defeats and I use them as my motivation.”

Neita’s GB team-mate Dina Asher-Smith failed to qualify for the final and then withdrew from the 200m after revealing she tore her hamstring earlier this month. 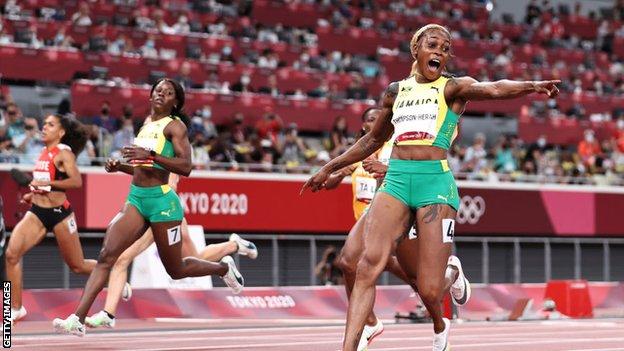 Fraser-Pryce, who qualified fastest for the final, found herself under pressure almost immediately from the gun as her usual whip-smart start did not fire as expected.

With the long-striding Thompson-Herah on her shoulder, Fraser-Pryce tensed up over the final 30 metres.

Thompson-Herah’s lead was comfortable enough for her to salute the clock and photographers as she crossed the line in a time that matches Griffith-Joyner’s second-fastest time.

Thompson-Herah, who came third in the Jamaican trials earlier this year, relished her victory over her domestic rivals, with silver little consolation to a grim-faced Fraser-Pryce.

“It wasn’t the best 30 metres because I had a stumble at about the third step and I never recovered from it,” said 34-year-old Fraser-Pryce, who was aiming to become the first woman to win three Olympic 100m titles.

“I am excited because, as a mother and at my fourth Olympics, to be able to stand again on the podium is just a tremendous honour.

“But, you know, my emotions are still very raw right now. I am sure I will go home and there will be some tears.”

Thompson-Herah has been suffering with an Achilles tendon injury for almost five years.

It forced her to withdraw from Doha 2019, where she had hoped to win her first individual world crown. Instead, she watched from home as Fraser-Pryce claimed her fifth.

She came close to pulling out of last month’s Jamaican trials because of a recurring bout of pain from the injury.

But she managed to make the start line and qualify in the 100m and 200m, ensuring she will have a chance to repeat her sprint double from Rio.

Of course, Tuesday’s 200m final will also give Fraser-Pryce a chance of revenge.

Great Britain will have three athletes in the women’s 800m final for the first time, with Keely Hodgkinson providing the standout performance.

The 19-year-old timed her finish to perfection to win her semi-final on the line in one minute 59.12 seconds.

“It’s a dream come true. I did not expect to be on this journey,” said Bell. “Never in my wildest dreams did I think I would be an Olympic finalist.”

A season’s best by Reece Prescod (10.12) sent him through as one of the three fastest losers, with Canadian 2016 bronze medallist Andre de Grasse (9.91) the fastest qualifier from Saturday’s heats.