Several leaders of opposition parties, including former Congress chief Rahul Gandhi, on Friday extended their solidarity to protesting farmers and joined their Kisan Sansad at the Jantar Mantar, saying the three “black” agri laws will have to be withdrawn.

Leaders of 14 opposition parties met at Parliament House and then reached the nearby Jantar Mantar to participate in the Kisan Sansad, which began on July 22 to mark over seven months of the farmers’ protests at Delhi’s border points against the laws.

The leaders neither spoke from the podium of the Kisan Sansad (farmers’ parliament) nor were they seated on the dais.

“Today all opposition parties together decided to support the farmers and demand the withdrawal of the three farm laws,” Gandhi told reporters.

“We want to give our entire support to all the farmers of the country,” he said.

The three farm laws were enacted in September last year, following which farmers, mainly from Punjab, Haryana and Uttar Pradesh, are protesting at Delhi border points since November.

“It will not work with a discussion on the farm laws and these black laws will have to be withdrawn,” Gandhi said, when asked that the government says it is ready to hold talks with farmers.

He also alleged that the government is not allowing the opposition to raise the Pegasus snooping issue in Parliament. 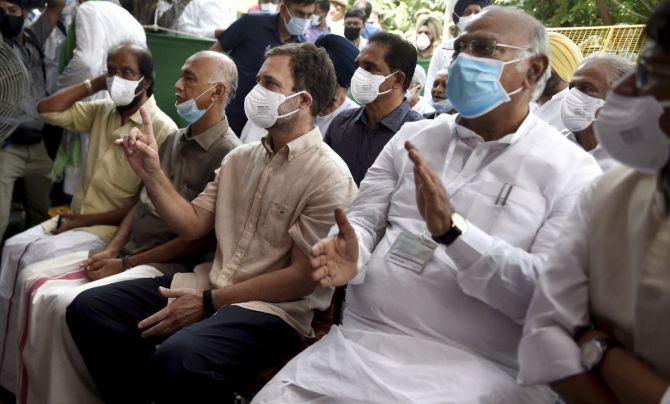 “You know what is happening in Parliament. We want to discuss the Pegasus (snooping) issue and they are not allowing it to happen. (Prime Minister) Narendra Modi has got into every telephone,” he said.

Gandhi, Leader of Opposition in the Rajya Sabha Mallikarjun Kharge and several other Congress leaders besides members from other opposition parties were present at the meeting at Parliament House.

Aam Aadmi Party and Trinamool Congress leaders were not present at the Kisan Sansad site.

“The Opposition leaders’ meeting decided to hold their protest at Jantar Mantar at 1 pm and sit with the protesting farmers,” a senior leader said.

The leaders left Parliament at 12.30 pm in a bus to reach Jantar Mantar.

Farmer groups have alleged these three agri laws will end the mandi and MSP procurement systems and leave the farmers at the mercy of big corporates, even as the government has rejected these apprehensions as misplaced.