Former Mumbai Police Commissioner Param Bir Singh’s office compound was used to plot the murder of Mansukh Hiren, the NIA has revealed in its charge sheet, bringing the former top cop’s role in the case under direct question.

As per the 10,000-page charge sheet filed by the National Investigation Agency, various meetings were held in then CP Param Bir Singh’s office compound to plot the execution of the murder of Mansukh Hiren – the businessman whose SUV was used to plant explosives near Antillia on February 25.

The charge sheet details that tainted former Mumbai police officer and alleged encounter specialist Pradeep Sharma ‘willingly and intentionally entered a well-organized conspiracy’ for the execution of the murder of Mansukh Hiren, which was a direct outcome of the ‘terrorist act’ committed by key accused Sachin Vaze and others. Sharma, along with Vaze and his associate Sunil Mane, attended various meetings at the CP’s office compound to plot Hiren’s murder.

As the main conspirator, Sharma hired another accused cop Santosh Shelar and his henchmen to murder Hiren by offering them a huge sum of money received from Vaze.

Pradeep Sharma directed Santosh Shelar to arrange Benami SIM cards and mobile for communication during the planning and execution of Mansukh Hiren’s murder. For this, Sharma allegedly received a huge cash amount from Sachin Vaze.

After Hiren was killed on March 5, Pradeep Sharma directed Santosh Shelar to flee from Mumbai to Nepal along with his henchmen, to avoid getting arrested. Noting his role in the criminal conspiracy, the NIA has charged Sharma under various sections of the IPC.

Prime accused Sachin Vaze, and his aide and fellow encounter specialist Pradeep Sharma have been charged with murder by the NIA in the Antilia Bomb scare case and the Mansukh Hiren Murder case. The NIA’s charge sheet runs into over 10,000 pages and has involved the recording of statements from over 200 witnesses. 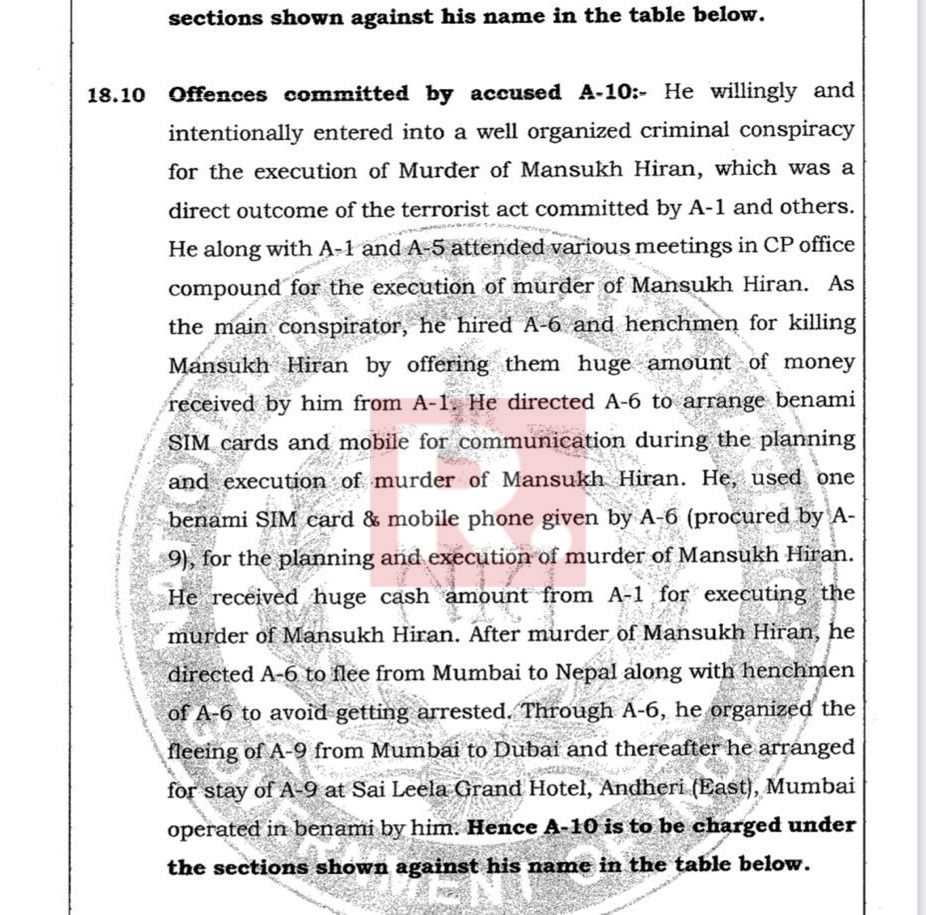 Earlier on Friday, Republic had accessed exclusive details of the charge sheet which clearly states that Vaze not only hatched a criminal conspiracy to place a Scorpio laden with gelatin sticks and a threat note, addressed to the Chairman of a major business group, near his residence, but, in fact, was instrumental in the car physically being placed there. All this, to regain his clout as an ‘ace detective encounter specialist’ of the Mumbai Police, the NIA said.

As part of his well-planned conspiracy, Sachin Vaze ensured that he was the prime investigative officer of the Antilia bomb scare case. He tried to get Mansukh Hiren to file a false complaint of theft of the car. Then Vaze began to pressurize him to take responsibility for placing the vehicle near Antillia. When Hiren refused, Vaze conspired with other co-accused Sunil Mane, Pradeep Sharma to eliminate Hiren.

Meanwhile, Param Bir Singh’s role in the Mansukh Hiren murder case comes to light at a  time when a warrant has been issued again him for repeatedly failing to appear before the Chandiwal Commission in connection with the extortion case. Earlier, a lookout notice was issued against him by the Thane Police after he was wanted in connection with the extortion cases against him. The whereabouts of the ex-Mumbai top cop who now holds the position of Director General of Maharashtra Home Guard are currently unknown.