Kabul, In recent pictures accessed by Republic Media Network, trained dogs are seen locked in cages, abandoned by their western masters who have fled Afghanistan.

As the United States ended its military involvement in Afghanistan, there are emerging pictures that depict an inexcusable botch-up. Amid the hasty exit of American troops from the war-torn state, in pictures accessed by Republic Media Network, trained dogs are seen locked in cages, abandoned by their western masters. While the masters returning to rescue them seems unlikely, the dogs’ fate in the Taliban-ruled country is unknown and ambiguous.

Global Anger over US’ inhumane, botched up withdrawal

The American military’s maxim of ‘we leave no man behind’ clearly doesn’t seem to extend to man’s best friend, which has been left at the mercy of terrorists. 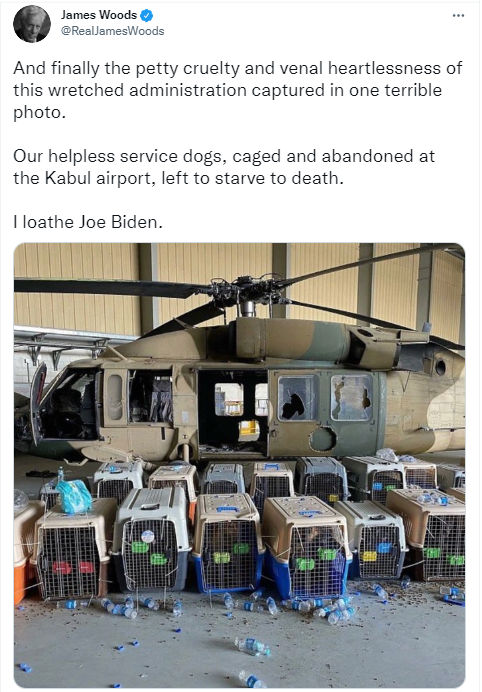 It is important to note here that when faced with the same choice, India unerringly evacuated its ITBP dogs that guarded the Indian Embassy in Kabul, with Roobi, Maya, and Bobby now safe on Indian soil. In fact, the US had also been evacuating its service dogs, with a Chinese media commentator even criticizing the country for affording the canine a seat on the evacuation plane while Afghans had to stand. It is unknown why this pack at Kabul airport was left behind.

Billions in military equipment left behind, including at Kabul airport

Apart from the dogs, the US has also left behind tens of millions of dollars worth of defense gear at the Kabul airport. Visuals have emerged of the Taliban dressed in US military uniforms at the airport, and while a number of the aircraft there have been sabotaged by the US, there are approximately a hundred, including helicopters and fixed-wing craft, which the Taliban has captured from the rest of the country.

Speaking on handing over such an arsenal to the Taliban terrorists, Marine Gen. Kenneth McKenzie, the head of U.S. Central Command, said some of the equipment had been ‘de-militarized and has essentially been rendered inoperable. A Defense department official who was not authorized to speak publicly in a statement to a foreign daily said, “Troops likely used thermite grenades, which burn at temperatures of 4,000 degrees Fahrenheit, to destroy key components of the equipment.” Another Defense official also not authorized to speak publicly, speaking to the same daily, said “A blast heard last week at the airport was related to destroying equipment.” However, in other parts of the country, huge caches of weapons and vehicles have been captured by the Taliban.

US troops withdraw from Afghanistan

The United States on Monday completed its withdrawal from the war-torn country, ending America’s longest war and closing a chapter in military history that began after the Al Qaeda attack on the United States on September 9, 2001. After the withdrawal, the US Department of Defense shared a picture of the last American soldier to leave Afghanistan. The image shows Maj. Gen. Chris Donahue can be seen boarding the C-17 on August 30th, ending the US mission in Kabul where its evacuation mission had been going on.