An elated Japanese side won the coveted Olympic baseball gold at Tokyo 2020 after beating the United States on Saturday.

No doubt watched by a TV audience of millions across a baseball-mad nation, the hosts won 2-0 in a largely empty Yokohama Baseball Stadium.

The USA claimed silver with the Dominican Republic taking bronze.

The winning squad will each receive a cash bonus of 10 million yen (£65,000) in what is a long-awaited first Olympic gold for them in the sport.

The celebrations on the field showed what it meant to Japan, with the entire team flooding the diamond and hoisting coach Atsunori Inaba into the air.

Munetaka Murakami hit a solo home run off the USA starting pitcher Nick Martinez in the third inning to put Japan ahead.

Tetsuto Yamada then slid home in the eighth to add a second run, beating the tag after an American throwing mix-up. Pitcher Ryoji Kuribayashi then saw the game safely out as the US failed to score. 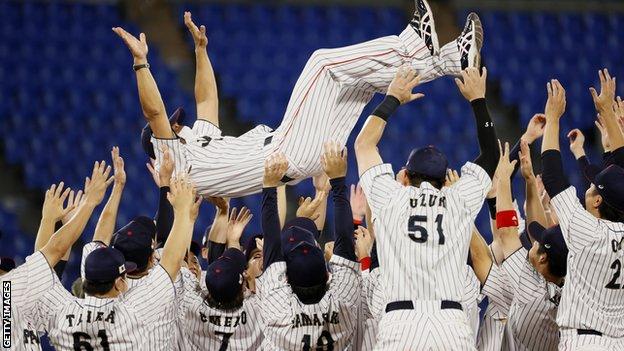 Head coach Atsunori Inaba was thrown into the air after the win.

Major League Baseball chose not to pause the season to allow its biggest stars to play in Tokyo, with the Americans made up of minor league players.

One notable player, however, was Eddy Alvarez, who became the sixth person – and third American – to win a medal in different sports at a summer and winter Olympics. He claimed silver in speed skating at Sochi 2014.

The US have not won baseball gold since 2000 in Sydney and, prior to Tokyo, the hosts had only reached the final in 1996, where they took silver. Japan also gained bronze in 1992 and 2004.

Baseball has been an Olympic sport since 1992 but was not contested in 2012 or in Rio four years later. It will not take place in Paris 2024 either.