The biggest space telescope ever conceived is scheduled to go into orbit in the coming hours. The $10bn James Webb Space Telescope will be launched on a European Ariane rocket from French Guiana.

It’s a project that has taken 30 years to design and build and is regarded as one of the grand scientific endeavours of the 21st Century.

Webb’s goal will be to try to image the very first stars and galaxies to shine in the Universe.

It will also have the power to probe the atmospheres of distant planets to look for gases that might hint at the presence of life.

The anticipation is high, but so too is the level of anxiety.

To get to space, Webb must first survive a 27-minute ascent on what is, in effect, a controlled explosion.

The telescope then has to unfold itself in a series of complex deployments, all of which must be completed flawlessly or the observatory as a whole won’t work.

“It’s a shining example of what we can accomplish when we dream big. We’ve always known that this project would be a risky endeavour. But, of course, when you want a big reward, you have to usually take a big risk.” 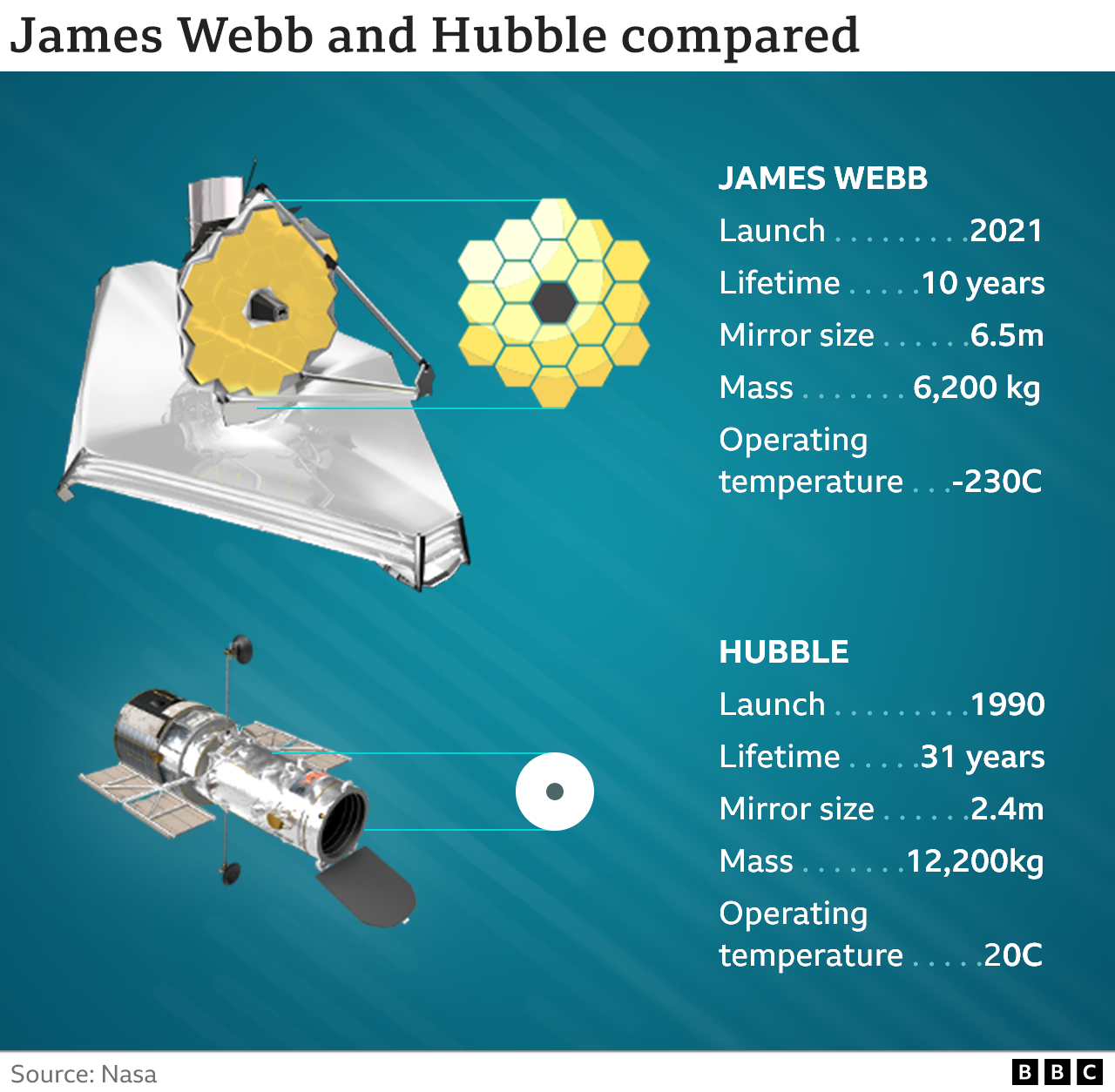 The James Webb telescope is named after one of the architects of the Apollo Moon programme, and the space agencies of the US, Europe and Canada, who are all partners on the project, regard it as a science flagship of no less importance.

Webb’s mission is to build on the discoveries of the Hubble Space Telescope, which, after 31 years in orbit, is nearing the end of operations.

Webb will look deeper into the cosmos and, as a consequence, much further back in time.

At the core of the new facility’s capabilities is its 6.5m-wide golden mirror.

This remarkable reflecting surface, allied to four super-sensitive instruments, should enable Webb to detect the light from the pioneer stars. These objects are theorised to have ignited more than 13.5 billion years ago.

“We think there should be stars, or galaxies, or black holes maybe beginning at 100 million years after the Big Bang. There won’t be many of them to find at that time but the Webb telescope can see them if they’re there, and we’re lucky,” he told BBC News. 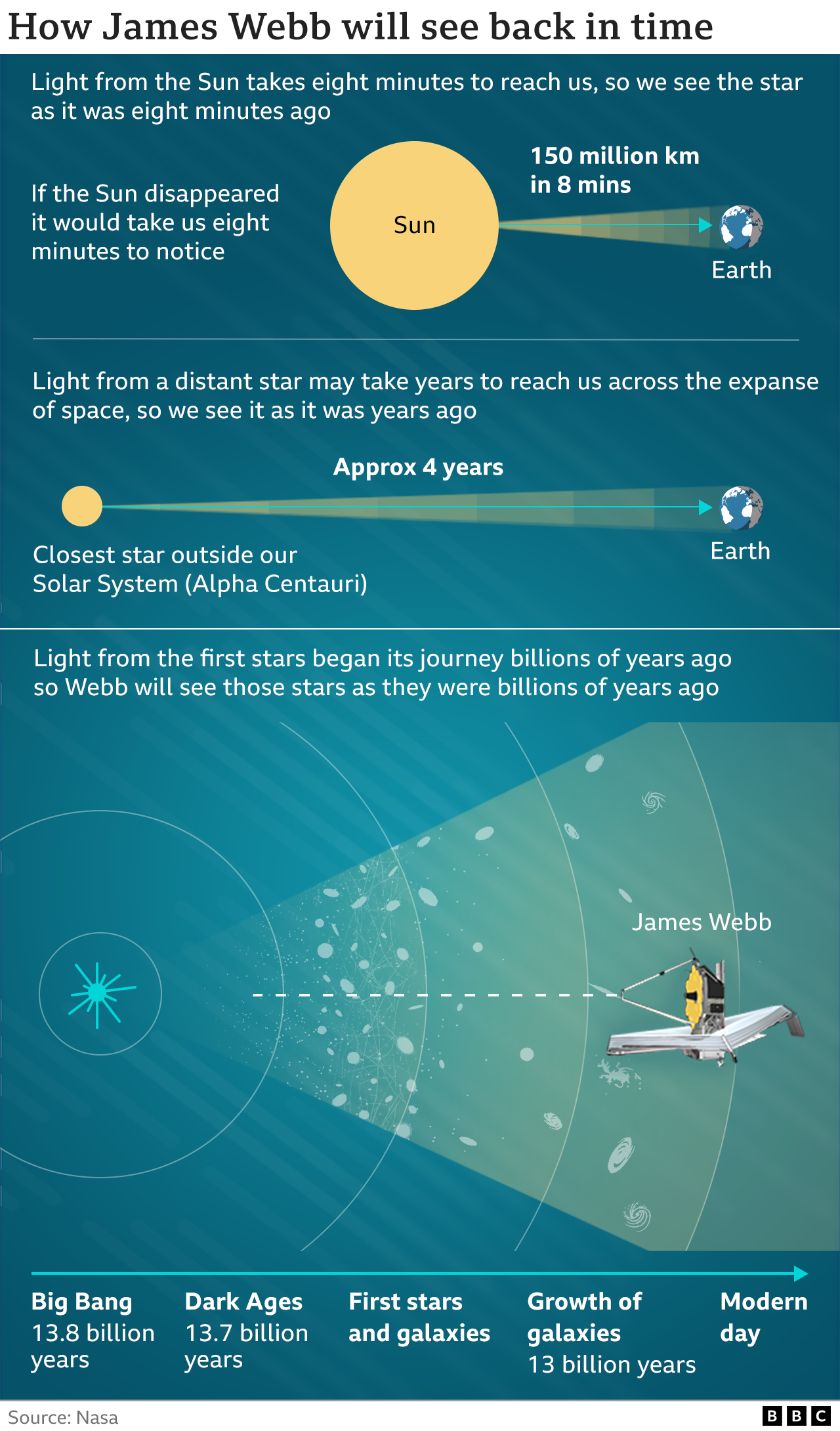 The pioneer stars are more than a mere curiosity. They began the process of seeding the cosmos with the first heavy chemical elements.

The calcium in our bones, the phosphorus in our DNA and the iron in our blood – all these atoms had to be “manufactured” in the nuclear reactions that make stars shine, and in the mighty explosions that end their existence.

In this sense, Webb will be charting our origins.

“One of my favourite things about astronomy in general is that it really gets right down to our big questions: Where do we come from? How did we get here? Are we alone? These questions are more than just arcane science questions; they’re questions that get to the heart of what it means to be human,” said Nasa deputy project scientist Dr Amber Straughn.

Is this astronomy’s biggest gamble?

Getting this telescope to space has been far from easy. Plagued with years of delays and billions of dollars of overspends – there were even calls to cancel the project along the way. But scientists persisted. And now, sitting on top of a rocket, is the biggest, most complex and most powerful space telescope ever built.

The launch will be nail-biting enough – but it’s what comes next that’s making astronomers even more nervous. Unfolding a tennis-court sized telescope in space is hands-down the most difficult deployment ever attempted. If anything goes wrong – and there are over 300 points where the operation could fail – it’s game over. But with the highest of risks, comes the highest of rewards.

Webb will be transformative, giving us spectacular new views of every phase of cosmic history. And this will help us to answer humanity’s biggest questions: How did the Universe begin, and are we alone in it? If Webb can do that, the gamble will have paid off.

Saturday’s flight to orbit involves one of the most dependable rockets in the business. The Ariane-5 has a greater than 98% record of success. Its last outright failure was in 2002.

The less-than-2% rate reflects the hazards that inevitably come with handling such an extreme vehicle.

People will naturally focus on it – there are no guarantees in the rocket business – but it’s fair to say that few Ariane missions have been subjected to the same level of detailed scrutiny as this one.

Engineers have reviewed every aspect of the vehicle’s performance. All questions have been answered.

The Ariane will fly east from Kourou, out over the Atlantic towards Africa.

A signal confirming Webb is in space and safe should be picked up by a ground antenna in Malindi, Kenya.

This will mark the start then of a month-long journey for the telescope as it moves out to its planned observing station 1.5 million km from Earth.