A sprawling network of more than 350 fake social media profiles is pushing pro-China narratives and attempting to discredit those seen as opponents of China’s government, according to a new study.

The aim is to de-legitimise the West and boost China’s influence and image overseas, the report by the Centre for Information Resilience (CIR) suggests.

The study, shared with the BBC, found that the network of fake profiles circulated garish cartoons depicting, among others, exiled Chinese tycoon Guo Wengui, an outspoken critic of China.

Each of these individuals has themselves been accused of spreading disinformation, including false information about Covid-19. 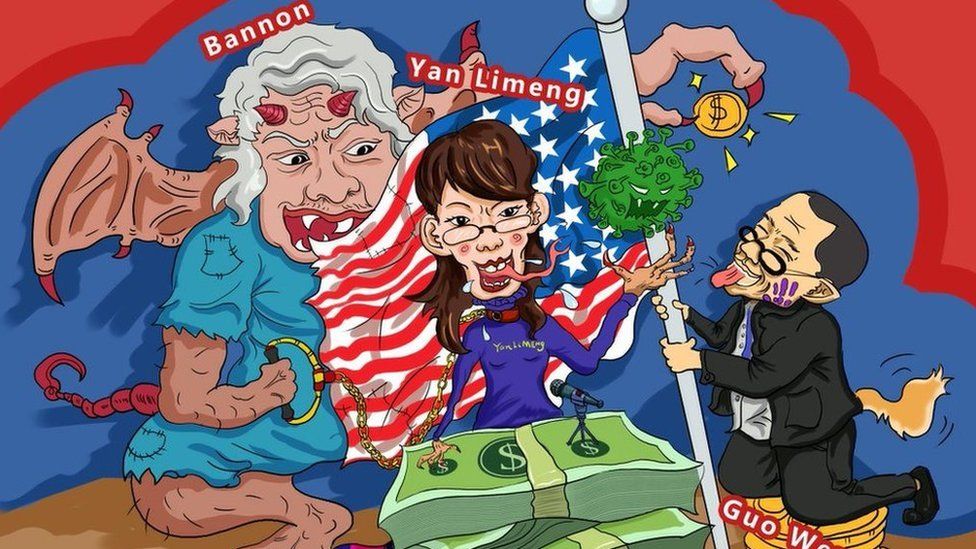 There is no concrete evidence that the network is linked to the Chinese government, but according to the CIR, a non-profit group which works to counter disinformation, it resembles pro-China networks previously taken down by Twitter and Facebook.

These networks amplified pro-China narratives similar to those promoted by Chinese state representatives and state media.

Much of the content shared by the network focuses on the US, and in particular on divisive issues like gun laws and race politics.

One of the narratives pushed by the network paints the US as having a poor human rights record. Posts from the fake accounts cite the murder of George Floyd among examples, as well as discrimination against Asians. 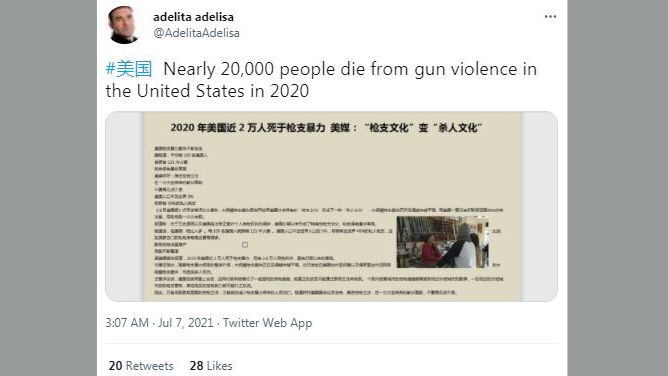 Some accounts repeatedly deny human rights abuses in the Xinjiang region, where experts say China has detained at least a million Muslims against their will, calling the allegations “lies fabricated by the United States and the West”.

“The aim of the network appears to be to delegitimise the West by amplifying pro-Chinese narratives,” said Benjamin Strick, the author of the CIR report.

How was the network uncovered?

The CIR mapped hashtags favoured by previously identified networks, unearthing more accounts that showed signs of being part of an influence operation.

Some profiles were created to post original content, while others only shared, liked and commented on those original posts, to help them reach a wider audience.

This kind of activity is often referred to as “astroturfing” because it is designed to create the appearance of a grass-roots campaign. 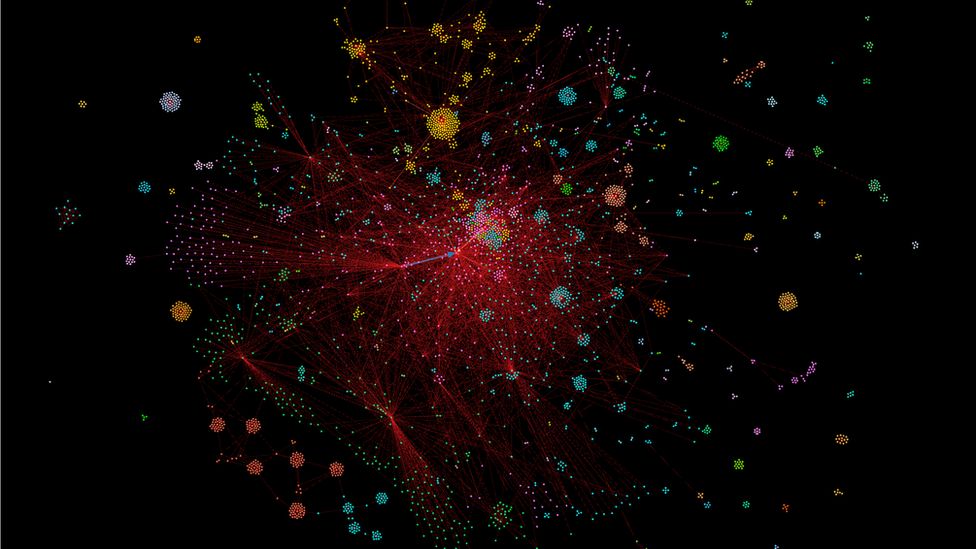 Many of the fake profiles used AI generated photos – a relatively new phenomenon that allows computers to create realistic looking images of people who don’t exist. Unlike stolen profile images of real people, the AI generated images, which are created by a type of machine learning framework called StyleGAN, cannot be traced using a reverse image search.

The use of fake profile pictures in disinformation campaigns is becoming more common as users and platforms become more wary of suspicious accounts.

Normally, a random collection of profile pictures would display much more variety in the cropping and the alignment of the eyes. 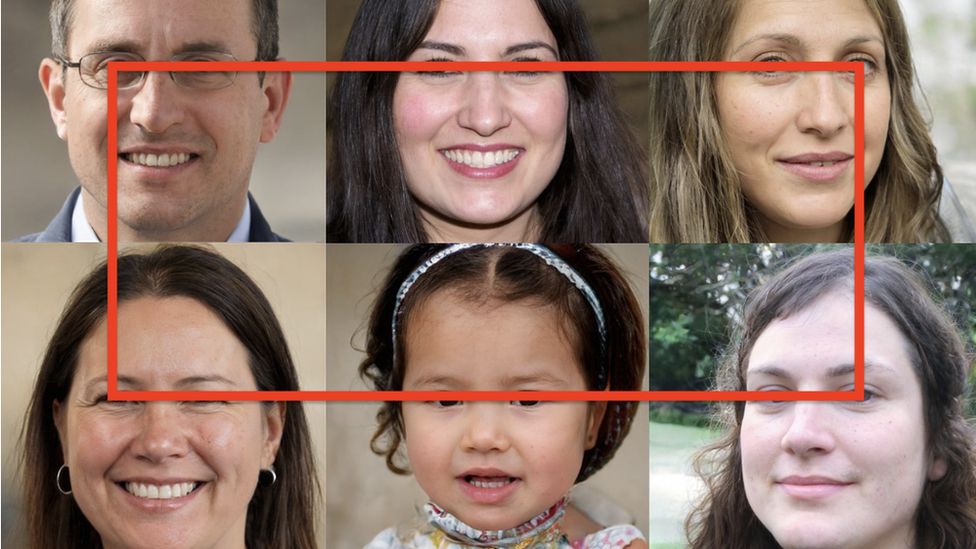 The network uses images of people who do not exist

Other signs include blurred edges around the hair, teeth at strange angles, and blurred objects around the face.

Many of the Facebook accounts believed to be part of the network appeared to have Turkish names. These accounts may once have belonged to real people but were later hijacked or sold and given new profile pictures. 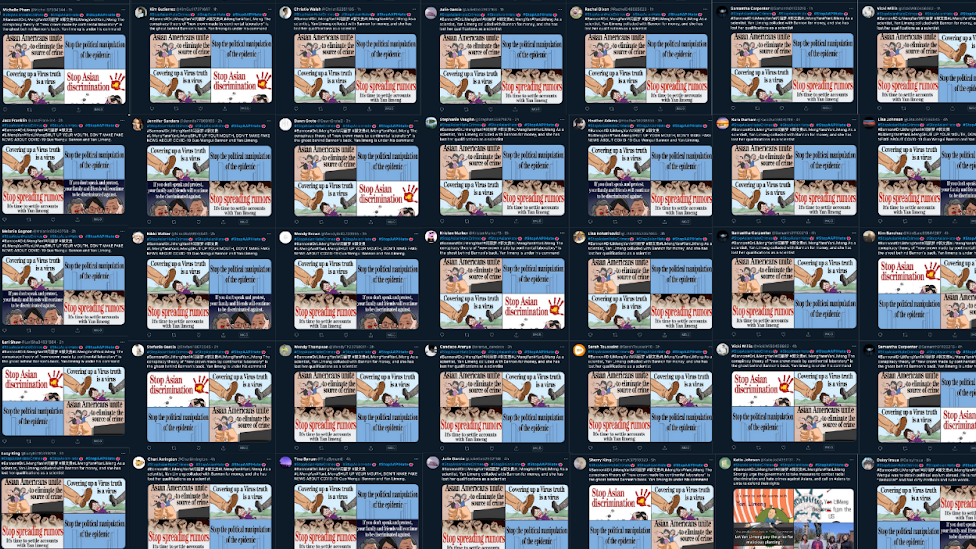 The report found spam Tweets using the same text, tags and images all uploaded on the same day

The CIR shared its research with the social media platforms involved.

Facebook has removed the accounts on its platform highlighted in the study.

A Facebook spokesman said: “In September 2019, we removed a network of spam activity that posted lifestyle and political clickbait, primarily in Chinese. This network had almost no engagement on our platform, and we continue to work with researchers and our industry peers to detect and block their attempts to come back, like those accounts mentioned in this report.”

Twitter said it had also now removed almost all of the accounts identified by CIR, as well as a number of others engaged in similar behaviour. It said its investigations are still ongoing.

“When we identify information operation campaigns that we can reliably attribute to state-linked activity – either domestic or foreign-led – we disclose them to our public archive.”

Over the past decade, billions of dollars have gone into funding the growth of China’s presence on international platforms.

But with Facebook, Twitter and YouTube blocked in the mainland, and only accessible via a VPN, the country has struggled to get such platforms recognised as viable competitors to Western juggernauts. It has needed not only Chinese voices, but foreign voices, to show that the country has “arrived”.

“Wolf warrior diplomacy” has emerged, with officials using Twitter accounts to fly the flag for Communist Party rhetoric. China wants to portray itself as a friend to the world – and not a repressive, authoritarian state, as it perceives Western nations make it out to be.

With more than one billion internet users, China certainly has the capability to orchestrate large-scale social media campaigns, and target what it sees as anti-China voices with a wealth of opposing opinions.

But with English-language skills limited in China, there are often clumsy tell-tale signs that a Chinese troll is behind such accounts. Many rely on automatic translation software to turn Chinese messages into English, meaning such messages are riddled with typos, or contain clumsy grammatical structures.

And with many Western outlets inaccessible to them within China, users generally have very little knowledge of who they are meant to be targeting, so they simply piggyback off the replies of others from within the same network.