The decision, which is seen as part of the BJP’s preparations for the Uttar Pradesh Vidhan Sabha elections next year, was welcomed by Chief Minister Yogi Adityanath. He described it as a step towards restoring the ancient glory of Ayodhya and said the highway would boost religious tourism.

Besides Ayodhya, similar parikramas are performed by devotees at Govardhan in Braj, Kamadgiri in Chitrakoot, and Tiruvannamalai in Tamil Nadu.

All three parikramas in Ayodhya — the 5 kos (around 15 km), 14 kos (42 km), and 84 kos (about 275 km) parikramas — are linked to Lord Ram. The Baal Kand of the Valmiki Ramayana mentions that Ayodhya was earlier known as Koshaldesh, initially spread over 48 kos, and was later expanded to 84 kos. The 84 kos parikrama is a circumambulation of Koshaldesh, touching all important places associated with the kingdom of Ram. The 14 kos parikrama is for the main Ayodhya city of that time, and the 5 kos parikrama circumambulates the inner circle within which the heart of Ram’s kingdom was located.

“As per Hindu belief, the 84 kos parikrama frees a person from the obligation of complete 84 lakh yoni (lives). Hindus believe the parikrama of Ayodhya started from Treta Yug, the guy of Lord Ram, which was over 1 lakh years ago,” Acharya Raghunath Das Tripathi of Ayodhya said.

Parikrama and its route

It is believed that King Dasharath performed a Putrayeshthi Yajna on the bank of the Manorama river some 20 km from Ayodhya, to seek sons from the gods. Subsequently, he was blessed with four sons from his three wives. The 84 kos parikrama starts and ends — after about 22 days — from the place where the yajna was performed, now identified as Makhaura in Basti.

The yatra is covered on foot, with some 25 stops and several places to rest. While the two shorter parikramas are completed by thousands of devotees every year, the 84 kos parikrama is undertaken by no more than 100-150 people — mostly sadhus — annually, Acharya Tripathi said.

According to officials, the 84 kos parikrama is done in the Hindu month of Kartik. Those who undertake the parikrama must eat grains only once a day, and depend on fruits for the rest of the meals. They must worship and bathe every day.

The pilgrims’ first stop on the parikrama is at Ramrekha temple in Basti; the next two stops are at Hanumanbagh in Dubaulia block of Basti, and the Shring Rishi Ashram in Ayodhya. The parikrama route passes through more than 100 villages in the five districts of Basti, Ayodhya, Ambedkar Nagar, Barabanki, and Gonda.

“The yatra moves on some 15 different roads, most of which are currently single lane,” Ayodhya Deputy Director (Information) Murlidhar said. The route of the 84 kos parikrama was decided long ago based on the traffic situation on these roads.

In 2013, the Vishwa Hindu Parishad (VHP) announced it would undertake the 84 kos parikrama. The plan was to start from Ayodhya and travel through Basti, Faizabad (now Ayodhya), Ambedkar Nagar, Barabanki, Bahraich, and Gonda before returning to Ayodhya, to revive the demand for the Ram Temple at the then disputed Ramjanmabhoomi-Babri Masjid site, ahead of the 2014 Lok Sabha elections. 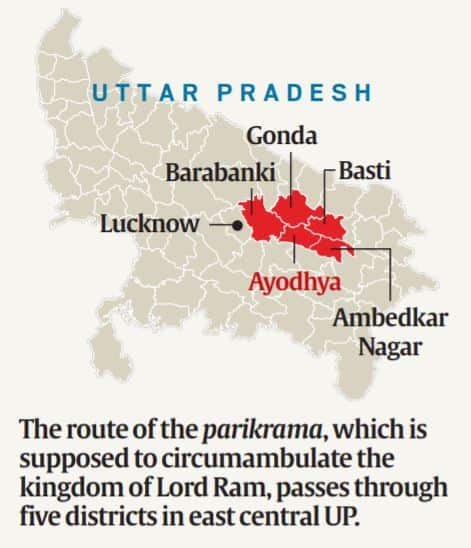 Since coming to power in 2017, the BJP government in UP has focused on developing religious places, including Ayodhya, Varanasi, Prayagraj, and Gorakhpur. Deepotsava has been celebrated on the eve of Deepawali in Ayodhya, special attention has been given to the Kanwar yatra, and ghats along holy rivers have been developed.

The development of the 84 kos parikrama marg can be seen as part of the same push. Trees mentioned in the Ramayana will be planted at the Janmabhoomi, along the 14 kos and 5 kos parikrama routes, and on gram sabha lands and in parks. Last September, the CM had directed officials to provide more facilities to pilgrims on all the parikrama routes.

Upgrading the 84 kos parikrama route, which is 15 mostly single-lane roads passing through five districts, will not be easy, Acharya Tripathi said. Many believe the government’s announcement is only to gain political mileage before the Assembly elections.

Back in 2015, the BJP MP from Faizabad, Lallu Singh, had demanded that the parikrama route be four-laned. But despite favourable statements from the government, no work started. Work on several similar projects — including the Ram-Janki Marg, the Ram Van Gaman Marg, and the giant statue of Ram in Ayodhya — too has been crawling.