The BJP, Congress, and the Shiv Sena won one Lok Sabha seat each, while assembly segments threw up a similarly mixed bag with results favouring ruling parties in several states as votes were counted on Tuesday for a crucial bypolls contest across 13 states.

Polling for three parliamentary seats and 29 assembly constituencies was held on October 30, an exercise is seen as a barometer of the political mood in the country ahead of assembly elections in politically critical Uttar Pradesh as well as other states. 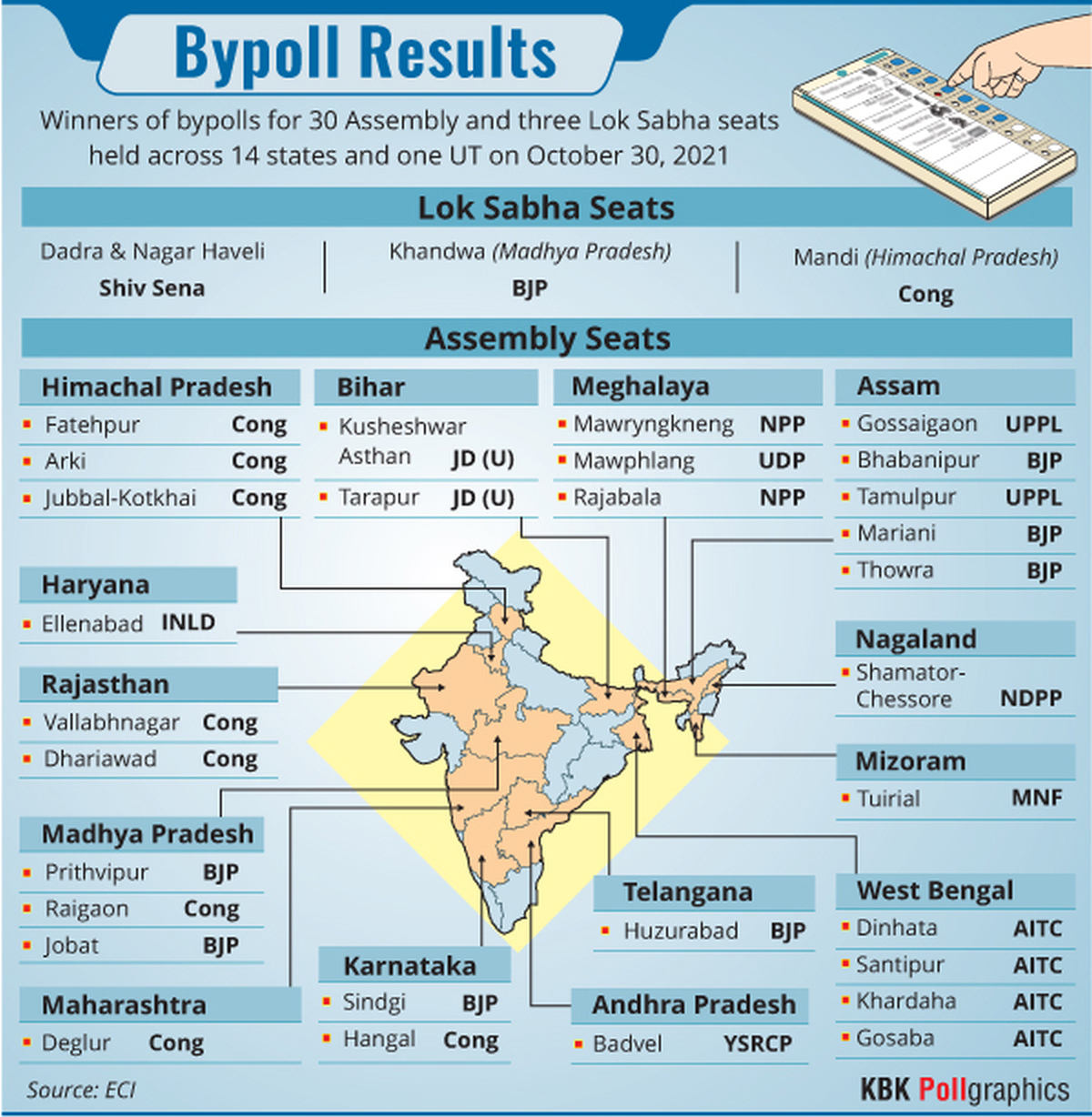 Though there was no discernible wave, some states stood out.

Voters in Assam and West Bengal, for instance, gave a decisive thumbs up to the ruling alliances.

In Himachal Pradesh, the ruling BJP lost all three assembly seats as well as the Mandi Lok Sabha seat to the opposition Congress.

Assembly by-elections were held in five seats in Assam, four in West Bengal, three each in Madhya Pradesh, Himachal Pradesh, and Meghalaya, two each in Bihar, Karnataka, and Rajasthan, and one seat each is in Andhra Pradesh, Haryana, Maharashtra, Mizoram, and Telangana.

Of the 29, the BJP had won in around half a dozen constituencies earlier, the Congress had nine, while the rest were with regional parties

The ruling BJP-led alliance in Assam won all the five assembly constituencies where by-polls were held, with the saffron party bagging three seats and its ally United Peoples’ Party Liberal emerging victorious in the two other, according to the Election Commission of India on Tuesday.

The BJP’s Phani Talukdar, Rupjyoti Kurmi and Sushanta Borgohain retained their respective Bhabanipur, Mariani, and Thowra seats which they had won in the assembly elections held earlier this year on tickets given by other parties but resigned after joining the saffron party.

Borgohain also retained the Thowra constituency winning by a margin of 30,561 votes over Raijor Dal’s Dhaijya Konwar, who fought as an independent candidate.

The BJP’s ally UPPL wrested the Gossaigaon constituency with its candidate Jiron Basumatary defeating Congress nominee Jowel Tudu by a margin of 28,252 votes while another party candidate Jolen Daimary beat his nearest rival, independent candidate Ganesh Kachary, by 57,059 votes in the Tamulpur seat.

The by-elections to these two constituencies were necessitated following the deaths of BPF and UPPL MLAs in Gossaigaon and Tamulpur respectively.

Kurmi, a firebrand leader of the tea-tribe community, had earlier won for five consecutive terms from Mariani on a Congress ticket but resigned from the party in June to join the BJP alleging that the party’s national leaders do not listen to the voices of the workers at the grassroots level.

Borgohain had first won from Thowra on a Congress ticket in 2011 but lost the subsequent election in 2016. He went on to wrest the seat from the BJP’s Kushal Dowari in 2021 but resigned from the Congress and the assembly in July citing “changed internal political atmosphere” within the party.

Talukdar had contested on an AIUDF ticket from Bhabanipur winning for the first time in the 2021 assembly polls after contesting unsuccessfully several times as an independent candidate in earlier assembly polls. He resigned from the AIUDF in August and joined the BJP.

With these results, the BJP’s strength in the 126-member Assam assembly increased to 62 and UPPL’s to eight. The other partner in the ruling coalition, Asom Gana Parishad, which had not fielded any candidate in this bypoll, has nine MLAs.

On the opposition bench, the Congress’ strength is 27, AIUDF has 15 members, BPF three, the CPI(M) one and there is an Independent MLA as well.