Belarus Olympian sprinter was given Polish visa after refusing ‘forced’ flight home who refused her team’s order to fly home early from the Olympics has been granted a humanitarian visa by Poland.

Krystina Timanovskaya, 24, is at the Polish embassy in Tokyo after spending the night secure in a hotel under protection from Japanese police.

She said she was forcibly taken to the airport for criticizing coaches, and voiced fears for her safety.

Belarus says she was removed from the team because of her emotional state.

Ms Timanovskaya told the BBC on Monday that she was safe, but said she had been advised not to give further details at this stage.

The incident has again put the spotlight on Belarus, which has been ruled by President Alexander Lukashenko since 1994. Last year, nationwide protests over his disputed re-election were violently repressed by the security forces.

Some of those who joined the demonstrations were also national-level athletes, who were stripped of funding, cut from national teams and detained.

Poland’s Deputy Foreign Minister Marcin Przydacz said Ms. Timanovskaya was in direct contact with Polish diplomats in Tokyo, and that Poland would do “whatever is necessary to help her continue her sporting career”.

Her husband has fled to the Ukrainian capital, Kyiv. He is set to join her in Poland, according to a Warsaw-based Belarusian opposition politician.

The Belarusian government has yet to comment on the Polish decision. 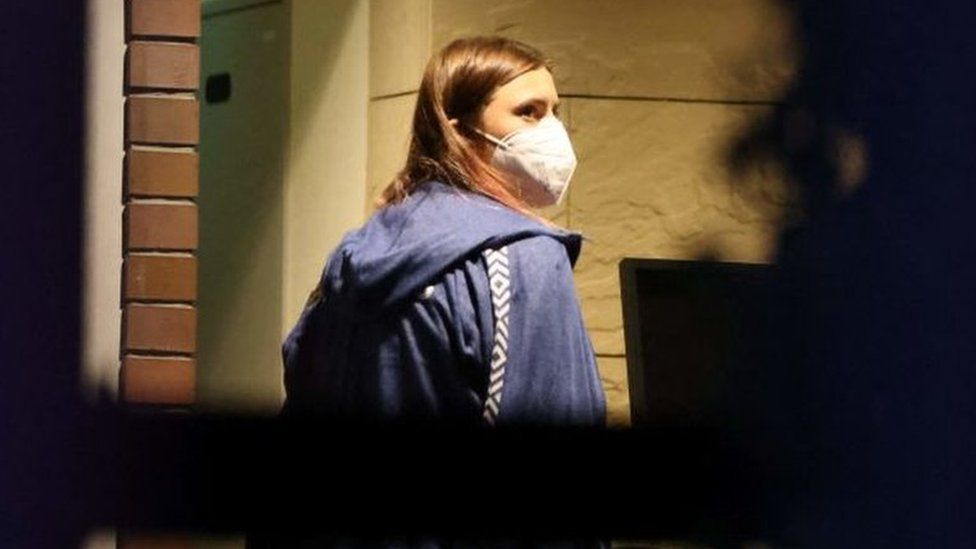 The sprinter was pictured inside Poland’s embassy in Tokyo

The EU, meanwhile, welcomed Poland’s decision. Nabila Massrali, a spokeswoman for EU foreign policy chief Josep Borrell, said the attempt by Belarus to forcibly repatriate Ms. Timanovskaya was “another example of the brutality of the repression of Lukashenko’s regime”.

“We express our full solidarity to Krystina Timanovskaya and commend the (EU) member states that offered her support. We welcome the fact that she has now been given a humanitarian visa by Poland,” Ms. Massrali said in a statement to Reuters.

The sprinter, who was due to compete in the women’s 200m event on Monday, had complained about social media about being entered into the 4x400m relay race at short notice after some teammates were found to be ineligible to compete.

The video led to criticism in state media, with one television channel saying she lacked “team spirit”.

Ms. Timanovskaya said officials had come to her room and given her an hour to pack her bags before being escorted to Tokyo’s Haneda airport. She says she was “put under pressure” by team officials to return home and asked the International Olympic Committee (IOC) for help.

“They are trying to get me out of the country without my permission,” she said in a video posted on the Telegram channel of the Belarusian Sports Solidarity Foundation, which was created last year to support athletes critical of the government.

Anatol Kotau, a member of the group, told the BBC on Sunday: “She’s afraid of repression on her family in Belarus – this is the main concern for her right now.” 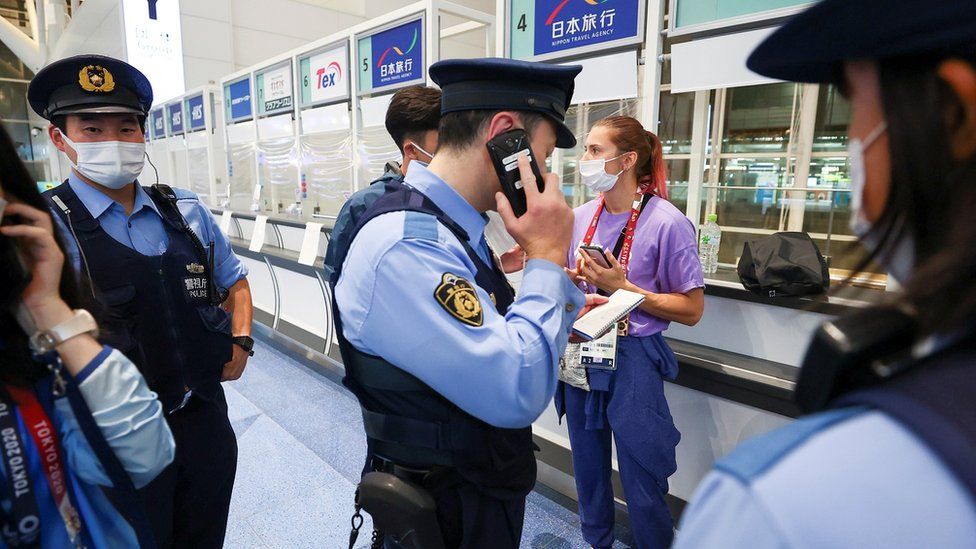 The athlete sought police protection at the airport terminal

The Belarusian Olympic committee said Ms. Timanovskaya had been taken off the team because of her “emotional and psychological condition”.

Team coach Yuri Moisevich said Ms. Timanovskaya appeared anxious when he spoke with her on Sunday.

“I was trying to have a calm conversation with her and I succeeded,” he said, adding: “Then I noticed that she would stop the conversation and start it again, then she would grab the phone and I saw that something was happening.”

On Monday, IOC spokesman Mark Adams said the body had taken measures against the Belarusian committee in the run-up to the Games.

It banned some officials, including the president’s son, for failing to protect athletes who had joined the demonstrations.

“Athletes are favoured by the state and honoured by society, and it is not surprising that athletes who speak out find themselves a target for reprisals,” she said.