Afghan media is reporting that Ashraf Ghani has left Kabul after stepping down as President of Afghanistan hours after the Taliban surrounded the capital city. As the Taliban is ready to take over Kabul, Afghanistan President Ashraf Ghani on Sunday left the country for Tajikistan, Reuters quoted a senior interior ministry official as saying.  According to the sources, his close aides have also left the country along with him.

The Taliban fighters have entered Kabul, Afghanistan’s capital city, tightening their grip on the nation as tens of thousands fled their rapid advance. According to TOLO News, Afghanistan president Ashraf Ghani and other leaders have left Kabul.

Earlier, the Taliban had said in a statement that they have ordered all their forces not to enter Kabul and they want a “transition process”.

The Taliban also now hold all of Afghanistan’s border crossings amid their offensive across the country, the Associated Press stated. Now, Kabul airport is the only route out of the country.

According to the report, the Taliban had taken the Torkham border crossing that represented the last post still under Afghan government control, Pakistan’s Interior Minister Sheikh Rashid Ahmed told a local TV channel.

US Secretary of State Antony Blinken has said that the US is evacuating remaining staff at the US Embassy in Kabul as the Taliban entered the Afghan capital. But he is playing down America’s hasty exit, saying “this is manifestly not Saigon.”

Speaking on ABC’s “This Week” on Sunday, Blinken said: “The compound itself, our folks are leaving there, and moving to the airport.”

Blinken also confirmed that U.S. Embassy workers were destroying documents and other items ahead of fleeing the embassy, but insisted “this is being done in a very deliberate way, it’s being done in an orderly way, and it’s being done by American forces there to make sure we can do it in a safe way.”

Taliban insurgents have entered Afghanistan’s capital Kabul saying they expected to take power within days, promising to moderate their earlier hardline Islamist rule even as foreign diplomats and many locals tried to leave.

According to TOLO News, with the exit of President Ashraf Ghani, Afghanistan no longer has an internationally recognised government.

According to TOLO News, the Ministry of Interior has said that police special units have been deployed in various Kabul city districts to guard against “opportunists,” and the police have permission to fire. This comes even after the Taliban said in its statement that it would not enter Kabul.

NATO also that it is “helping to maintain operations at Kabul airport to keep Afghanistan connected with the world.”

In a statement, it said that it would also maintain its diplomatic presence in Kabul.

“The security of our personnel is paramount, and we continue to adjust as necessary,” it added.

“We support Afghan efforts to find a political solution to the conflict, which is now more urgent than ever,” the statement said.

Air India Flight AI243 carrying 129 passengers from Kabul is likely to land at Delhi’s Indira Gandhi International Airport (IGI) at 7.15 pm today. This is the last flight of the day. Further flights are unscheduled between Kabul – Delhi.

The Taliban has also started issuing degrees under the ‘Islamic Emirate of Afghanistan’ emblem.

The spokesman of the ‘Islamic Emirate’ has assured banks, traders, money changers and shops in Kabul and other countries of the safety of their money and assets under the Taliban.

UAE’s ‘flydubai’ will be suspending Kabul flights from Monday, an airlines spokesperson has said.

India has put in place contingency plans to evacuate hundreds of its officials and citizens from Kabul, government sources said on Sunday.

“The government will not put the lives of its staffers at the Indian embassy and Indian citizens in Kabul at any risk and plans have already been finalised in case they require emergency evacuation. The government is closely monitoring the fast-paced developments in Afghanistan,” sources said.

On being asked when the Indian staffers and citizens would be evacuated, they said decisions would depend on the ground situation.

Pope Francis has urged dialogue in Afghanistan so that people can live in peace and with security. He said that he shares “the unanimous concern for the situation in Afghanistan” as Taliban fighters sweep across the war-torn country.

From a window overlooking St. Peter’s Square, the pope asked for prayers “so that the clamor of weapons may cease and solutions may be found at the negotiating table.”

“Only in this way, may the battered population of the countrymen and women, elderly and children — return to their homes and live in peace and safety, with full mutual respect,” he added.

Deputy chief of the Taliban,Mullah Abdul Ghani Baradar, has arrived in Kabul and is negotiating a transfer of power at the presidential palace.

The British Ambassador will also be airlifted from Kabul.

Meanwhile, the Kremlin’s envoy to Afghanistan has said that there are no plans to evacuate the Russian embassy in Kabul.

The Taliban has promised to guarantee the safety of the Russian embassy in Kabul, Russia’s state news agency has reported.

“The organisation has “good relations with Russia” and a “policy in general to ensure safe conditions for the functioning of the Russian and other embassies,” news agency AP quoted Suhail Shaheen, a spokesman for the Taliban’s political office, as saying to Tass.

Zamir Kabulov told the Interfax news agency that Russia’s ambassador and its staff are “calmly carrying out their duties.”

Afghanistan’s Acting Interior Minister Abdul Sattar Mirzkwal on Sunday said that Kabul will not be attacked and the transfer will take place peacefully. He says the security of Kabul is the responsibility of the security forces. He assured that Afghan forces would ensure the security of the residents in the capital city.

Acting Interior Minister Abdul Sattar Mirzakwal said Kabul will not be attacked and that the transition will happen peacefully.

He assures Kabul residents that security forces will ensure the security of the city. pic.twitter.com/uim9LVqn9q

Three Afghan officials told the Associated Press that the Taliban have entered the outskirts of Kabul. Taliban fighters were in the districts of Kalakan, Qarabagh, and Paghman near Kabul, they said. A general view of the green zone in Kabul, Afghanistan March 13, 2019. (Reuters/File Photo)

Though the Taliban’s arrival at the gates of Kabul did not trigger a fight, government offices suddenly began sending workers home early on Sunday as military helicopters buzzed overhead, the Associated Press reported.

Meanwhile, the Taliban said they won’t take Kabul “by force”, adding that negotiations are underway for a peaceful entering into the capital city.

“Since the capital Kabul is a large and densely populated city, the Mujahideen of the Islamic Emirate do not intend to enter the city by force or fighting, but rather to enter peacefully through Kabul. Negotiations are underway. Until the transfer process should be completed in a safe and secure manner, no one’s head, property and honour should be harmed and the lives of the citizens of Kabul should not be jeopardised,” the Taliban’s statement read.

The Taliban say they have seized Maidan Wardak provincial capital on Sunday, which is about 90 kilometers from Kabul. The Taliban also captured Jalalabad, near a major border crossing with Pakistan, leaving Afghanistan’s central government in control of just Kabul and six other provincial capitals out of the country’s 34. 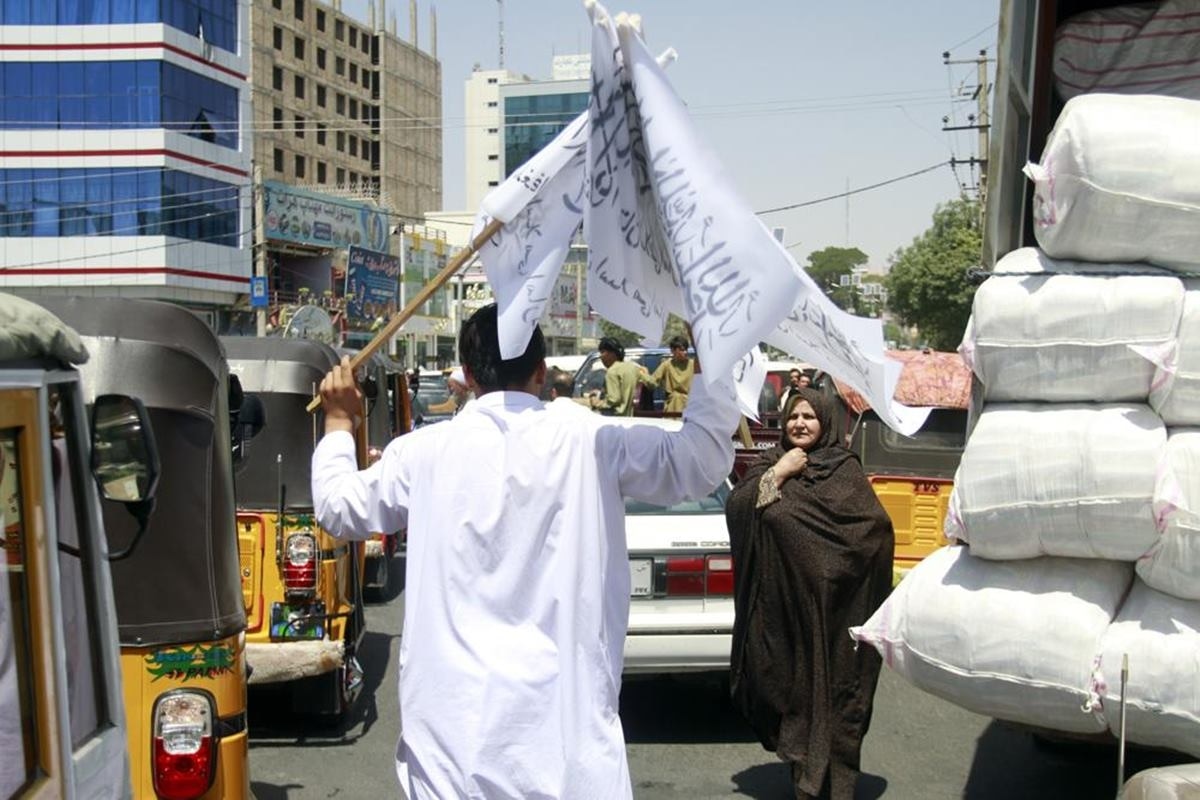 On Saturday, the Taliban said in a statement that their rapid gains showed they were popularly accepted by the Afghan people and reassured both Afghans and foreigners that they would be safe.

Amid the looming security threat, the US has started evacuating its officials from its embassy in Kabul. Helicopters were seen landing at the US Embassy in Kabul as diplomatic vehicles leave the compound, the Associated Press reported.

The embassy also instructed its staff to destroy sensitive materials as part of the “Emergency Destruction Services” protocol.

The development comes weeks before US troops are scheduled to leave Afghanistan.