Ferocious fighting is taking place in a major Afghan city, amid fears it could be the first provincial capital to fall to the Taliban.

Lashkar Gah in southern Helmand province is under heavy assault from the militants, despite the persistent US and Afghan airstrikes.

The Taliban are said to have seized a TV station. Thousands of people fleeing rural areas took shelter in buildings.

“There is fighting all around,” a doctor told the BBC from his hospital.

Hundreds of Afghan reinforcements have been deployed to battle the militants. The Taliban have made rapid advances in recent months as US forces have withdrawn after 20 years of military operations in the country.

Helmand was the centerpiece of the US and British military campaign, and Taliban gains there would be a blow for the Afghan government.

An Afghan military commander in the city warned that a Taliban victory would have a “devastating effect on global security”.

“This is not a war of Afghanistan, this is a war between liberty and totalitarianism,” Maj Gen Sami Sadaat told the BBC.

On Monday, the Afghan information ministry announced that 11 radio and four television networks in Helmand province had stopped broadcasting due to what it described as Taliban “attacks and threats”.

Attempts by the militants to capture Kandahar, Afghanistan’s second-largest city, have continued after rocket strikes hit its airport on Sunday.

Seizing control of Kandahar would be a hugely symbolic victory for the Taliban, giving them a grip on the south of the country.

In a third besieged city, Herat, in the west, government commandos are battling the insurgents after days of fierce fighting. Government forces have taken back some areas after a UN compound was attacked on Friday.

Videos shared on social media appeared to show residents on the streets and rooftops of Herat shouting “Allahu akbar” (“God is greatest”) in support of the government’s gains. 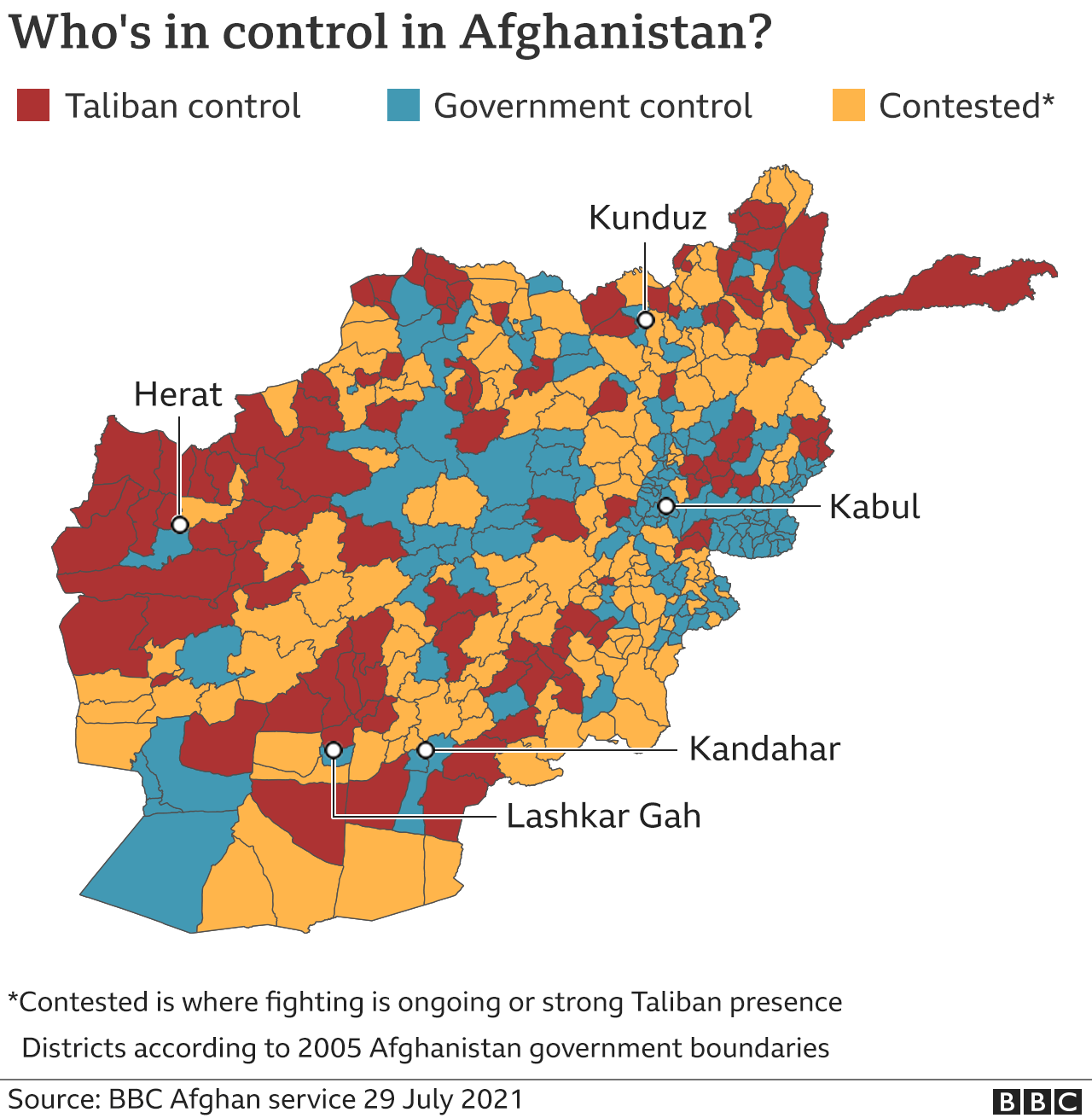 As government forces struggled to contain Taliban advances, President Ashraf Ghani blamed the sudden withdrawal of US troops for the increase in fighting.

“The reason for our current situation is that the decision was taken abruptly,” he told parliament.

Mr. Ghani said he had warned Washington that the withdrawal would have “consequences”.

Although nearly all its military forces have left, the US has continued its air offensive in support of government troops. Strikes targeting Lashkar Gah continued late on Monday.

President Biden’s administration announced on Monday that because of the increase in violence, it would take in thousands of more Afghan refugees who worked with US forces.

The US and UK have accused the Taliban of committing possible war crimes by “massacring civilians” in a town captured near the Pakistan border.

US Secretary of State Antony Blinken said he had seen reports of “deeply disturbing and totally unacceptable” Taliban atrocities.