Fighting is raging around three major cities in southern and western Afghanistan as Taliban militants seek to seize them from government forces.

They have made rapid gains in rural areas since it was announced almost all foreign troops would go by September.

But the fate of these key cities could be crucial amid fears of a humanitarian crisis and how long government forces will be able to hold out.

The fundamentalist Islamist militia is already thought to have captured up to half of all Afghanistan’s territory, including lucrative border crossings with Iran and Pakistan.

One MP in Kandahar told the BBC the city was at serious risk of falling, with tens of thousands of people already displaced and a humanitarian disaster looming.

Gul Ahmad Kamin said the situation was getting worse hour by hour, and the fighting within the city was the most severe in 20 years.

He said the Taliban now saw Kandahar as a major focal point, a city they want to make their temporary capital. If it fell, then five or six other provinces in the region would also be lost, Mr Kamin said. 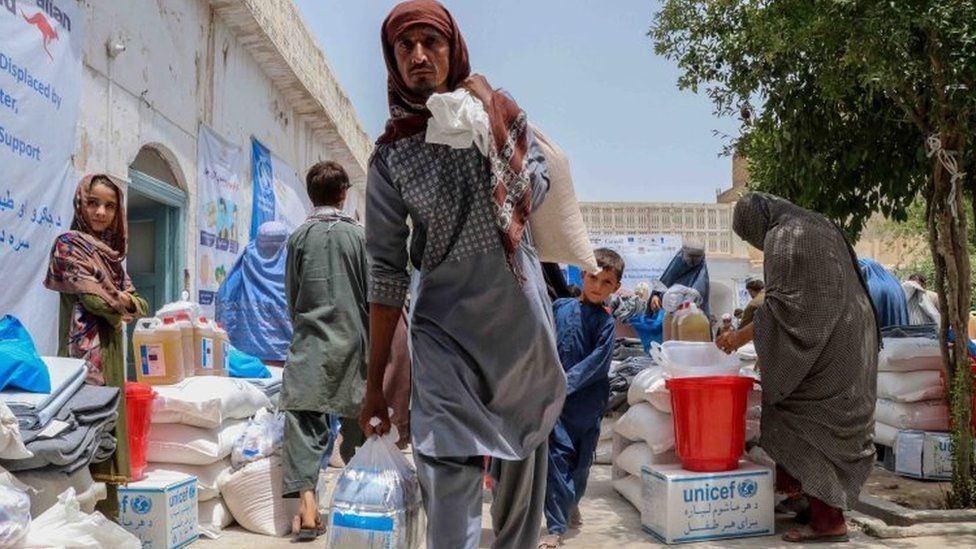 Thousands have been displaced in Kandahar, amid fighting between the army and the Taliban

He said the Taliban fighters were on several sides of the city and because of the large civilian population government forces would not be able to use heavy weaponry if the militants got fully inside.

There are reports of fighting in at least five different locations.

The US is still carrying out air strikes to support the Afghan forces, who have recaptured a district around the airport.

A guard outside a UN compound near the airport was killed on Friday in what the UN described as a deliberate Taliban attack.

Residents say few places in the city are safe and some people are taking up arms to defend themselves.

Ismail Khan, a former commander who fought against Soviet forces in the 1980s, has launched an armed movement to try to defend the city.

In Lashkar Gah, capital of the southern province of Helmand, insurgents are reportedly still within 2km of the city centre, although government forces had succeeded in holding back an advance overnight.

The commander of Afghan forces said the militants had suffered significant casualties.

Local sources told the BBC the Taliban had advanced close to the governor’s office on Friday before being forced back.

The EU’s special envoy for Afghanistan, Tomas Niklasson, said he believed the war was set to get much worse.

He told the BBC’s chief international correspondent, Lyse Doucet, that he feared the Taliban way of thinking now was “something they had in the past – re-establishing… their Islamic emirate”.

And the former head of the British Armed Forces, Gen David Richards, warned the international withdrawal could result in the collapse of the Afghan army’s morale, leading to Taliban control and possibly a renewed international terrorist threat.

Humanitarian organisations have also warned of a major crisis in coming months as the Taliban continue their offensive – with a lack of food, water and services, and overcrowding in camps for the displaced.

US troops and their Nato and regional allies forced the Taliban from power in November 2001.

The group had been harbouring Osama Bin Laden and other al-Qaeda figures linked to the 11 September 2001 attacks in the US.

But despite a continued international presence, billions of dollars of support and training for the Afghan government forces, the Taliban regrouped and gradually regained strength.

In February 2020, then-US President Donald Trump and allies agreed to formulate a deal with the Taliban on the withdrawal of international combat forces.

This year, President Joe Biden announced the withdrawal would take place by September.