“With effect from 15th Nov 2021, APSEZ will not handle EXIM containerized cargo originating from Iran, Pakistan, & Afghanistan,” the Group said.

A week after over 3,000 kg of Heroin was seized from Gujarat’s Mundra Port, the Adani Group on Monday issued a trade advisory stating that the Adani Ports and Special Economic Zone (APSEZ) Limited will no longer accept containerized cargo from Iran, Afghanistan, and Pakistan. The trade advisory will be applicable to all terminals of APSEZ with effect from November 15, 2021.

“Please be informed that with effect from 15th November 2021, APSEZ will not handle EXIM containerized cargo originating from Iran, Pakistan, and Afghanistan,” the Adani group stated in the trade advisory, underlining that it will be applicable to all terminals of the APSEZ. The trade advisory comes a day after the National Investigation Agency probing the Mundra port drug haul conducted searches at various locations across multiple states including in Chennai, Coimbatore, Vijaywada. The searches were conducted under sections 120B IPC, section 8 (C), 23 of NDPS Act, and section 17, 18 of Unlawful Activities (Prevention) Act, 1967. 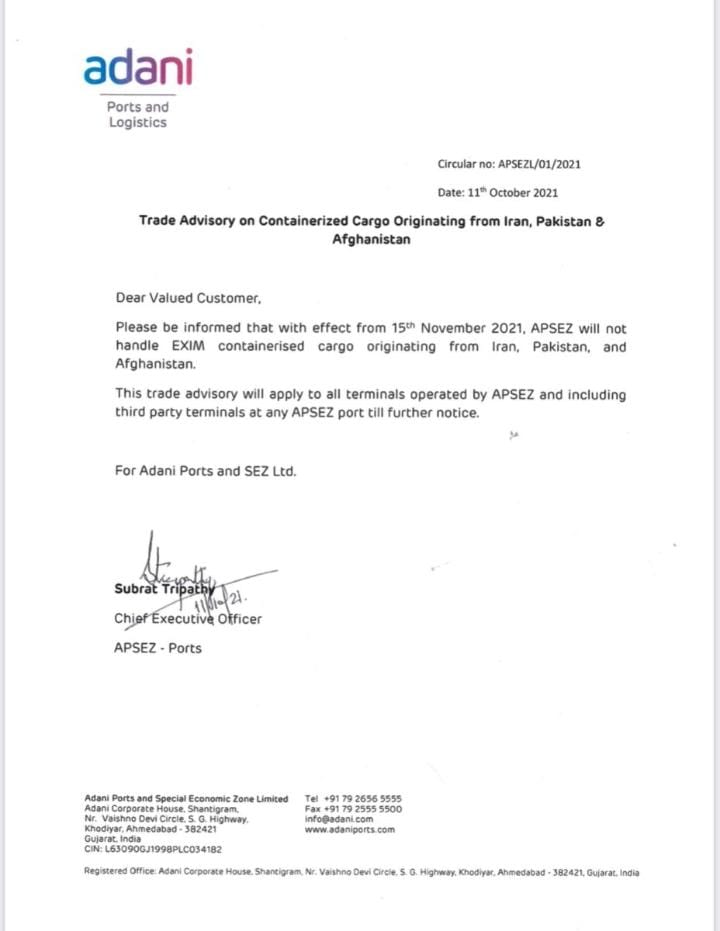 On September 12, the Directorate of Revenue Intelligence (DRI) seized 2,988.21 kg (almost 3 tonnes) of heroin worth Rs 21,000 crore from two containers at the Mundra port. As per reports, the heroin was imported by a trading company registered in Vijayawada in Andhra Pradesh and was declared as semi-processed talc stones originating from Afghanistan and shipped from Bandar Abbas Port in Iran to Mundra Port in Gujarat. The heroin that came packed in in plastic pipes painted to resemble bamboos was alleged to be taken to Delhi, and afterward, to other states, especially Punjab.

A couple- Machavaram Sudhakar and his wife Govindaraju Durga Purna Vaisali, were arrested by the DRI in connection to the case on September 17. The DRI also arrested Coimbatore resident Rajkumar P the following day, on September 18.